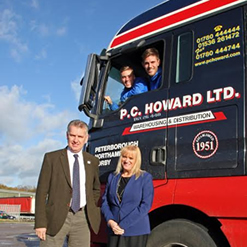 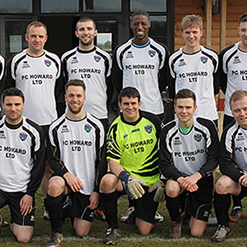 PC Howard is a family business – promoting community spirit is part and parcel of the PC Howard company ethos and as a business we endeavour to support as many local communities as possible in the areas we operate. Examples of the support that we provide these communities can be summarised as follows:

We have been supporting the Bulgarian Orphanage appeal , which is being managed through our Peterborough depot. We have been collecting and storing these in our warehouse for onward distribution to Bulgaria.

This year we have again provide vehicles for the annual Brixworth Carnival ,this is a great day out.

We have again provided sponsorship to the Kings Cliffe under 9's , this team is managed by James Willimott who welcomes our continued support of this group , which encourages youngsters not only to play football but to engage in sporting activities.

We have again provided support to the local amateur dramatics group , know as the Kings Cliffe Players by advertising in their program. The Group normally produces two plays a year which are performed in Kings Cliffe Village Hall and their success is now well know , with people traveling from far a field to see their production. This year we have also supported the Kings Cliffe Football main team, which is within the local division. We have funded a new team kit for the current year.

PC Howard have advertsing boards at the Northampton Rugby ground For a number of years we have also taken an advertising board at the Saints Rugby Ground in Northampton.

We also have a advertising board at the POSH ground , which shows our support for the POSH . Bill Howard , our fleet Director, has been a life long supporter of the POSH and rarely misses a home came - if it was not that Saturdays was a busy day for our maintenance operation I am sure he would be attending the away games as well !

We also have an advertising board at Swindon Town FC, which shows our support for the local team. We also sponsor an amateur youth team Lydiard FC which is also a club based in the Swindon area.


People who viewed this also liked...

Make us your Logistics Partner...